Why is 6 scared of 7? Because 7, 8, 9. A silly little play on numbers I know, but this was the response from my younger daughter when I asked her for some “fun math inspiration” for writing this article.  Surprisingly, I was inspired. I started thinking about number and logic puzzles and asking myself why 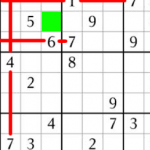 don’t we spend more time in math doing puzzles and/or number tricks? Puzzles and number tricks can help students develop critical thinking skills, number sense, persevere and engage in arguments and engage in conversations about math and thinking. Students don’t get the chance to experience the pure fun and wonder that numbers and logic entail because we spend so much time drilling and killing them with rote practice in the never-ending standardized test prep. I say let’s bring the fun back! There is of course the real-world application argument. The Common Core Standards of Mathematical Practiceare reemphasizing the need for relevant application of math content. Teachers and textbooks are continually trying to provide real-world applications.  The CC modeling standard says  “mathematically proficient students can apply the mathematics they know to solve problems arising in everyday life, society, and the workplace.” But does it all have to be real-world? I suggest we also provide students with the opportunity to solve puzzles and do number tricks. These are viable ways of helping students develop the reasoning and number sense supported by the following Common Core Standards:

Scott Farrand’s Ignite talk at the California Math Conference North sums up this idea of using puzzles to challenge students to think critically in mathematics.

What kind of puzzles and number tricks am I talking about?  There are a plethora of examples out there, so I am just going to list some of my favorites, many of which I used with my middle and high school students and some of which I just discovered. If anyone else has some suggestions for logic and number puzzles, send them our way. Let the fun and games begin!

4 thoughts on “A Puzzling Math Situation”