As a New Yorker, I have no lack of museums to suit my every viewing whim. Matisse? Just head to the Metropolitan. Edvard Munch? The Scream is at the Museum of Modern Art. But where should I go when I’m itching for some Pythagoras or Euler? Why, the Museum of Mathematics of course!

Just two weeks ago, the Museum of Mathematics (MoMath) opened its doors. The largest museum of its kind in the United States, MoMath occupies 19,000 square feet along the north side of Madison Square Park in Manhattan. 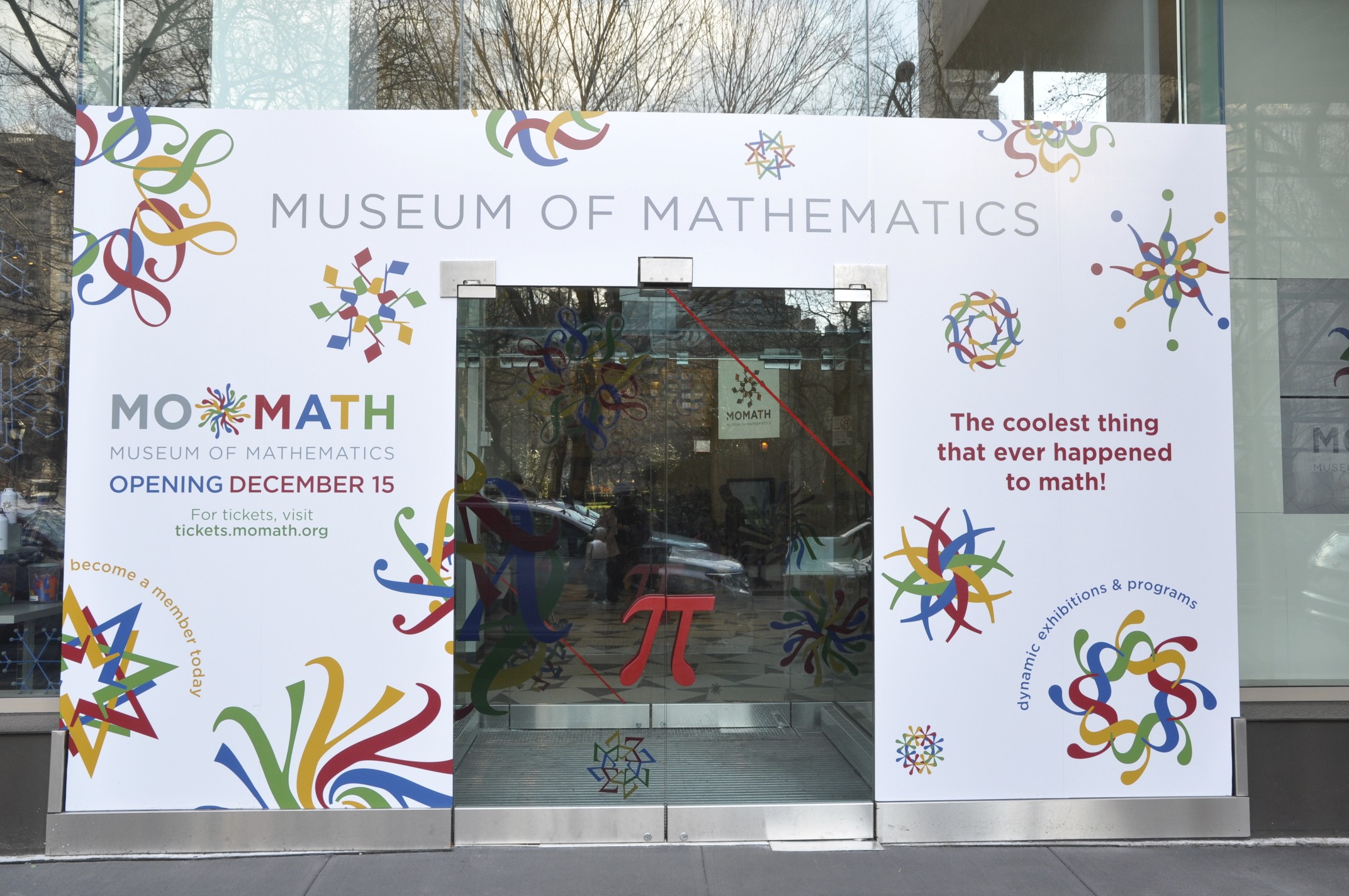 At right is a picture of MoMath’s entrance. Unlike most museums, MoMath doesn’t have a single logo to identify itself. All of the designs in the photo were generated with Mathematica, and visitors create similar symmetric designs for themselves when they initialize their museum badge.

While strolling through the museum, I spotted a variety of mathematical motifs, from the door handle in the shape of π to the pattern on a bathroom wall shown in the picture below. Can you spot a hidden message in the network of segments?

There are 30 interactive exhibits to explore in the museum, and I’ll report on just a few. Formula Morph, shown below, gives visitors the chance to experiment with a variety of three-dimensional shapes and their corresponding algebraic representations. The neat twist here is the method by which you interact with the equations: To change a green-colored coefficient to a different value, you turn the corresponding green knob.

Another exhibit called Polypaint allows visitors to create wallpaper patterns by dipping an electronic paintbrush into empty color-coded paint cans and then painting onto a large touchscreen. As you apply brushstrokes to create your masterwork, the pattern is replicated across the entire screen, based on the wallpaper pattern you chose. (The iOS app, iOrnament, works similarly.)

The String Product exhibit features a giant paraboloid that cuts through the spiral staircase connecting the museum’s two floors. Visitors press any two numbers from 1 to 10 on a keypad, and the string connecting those numbers lights up on the paraboloid. By observing where the string intersects the vertical axis of the paraboloid, visitors can view the product of the two numbers. 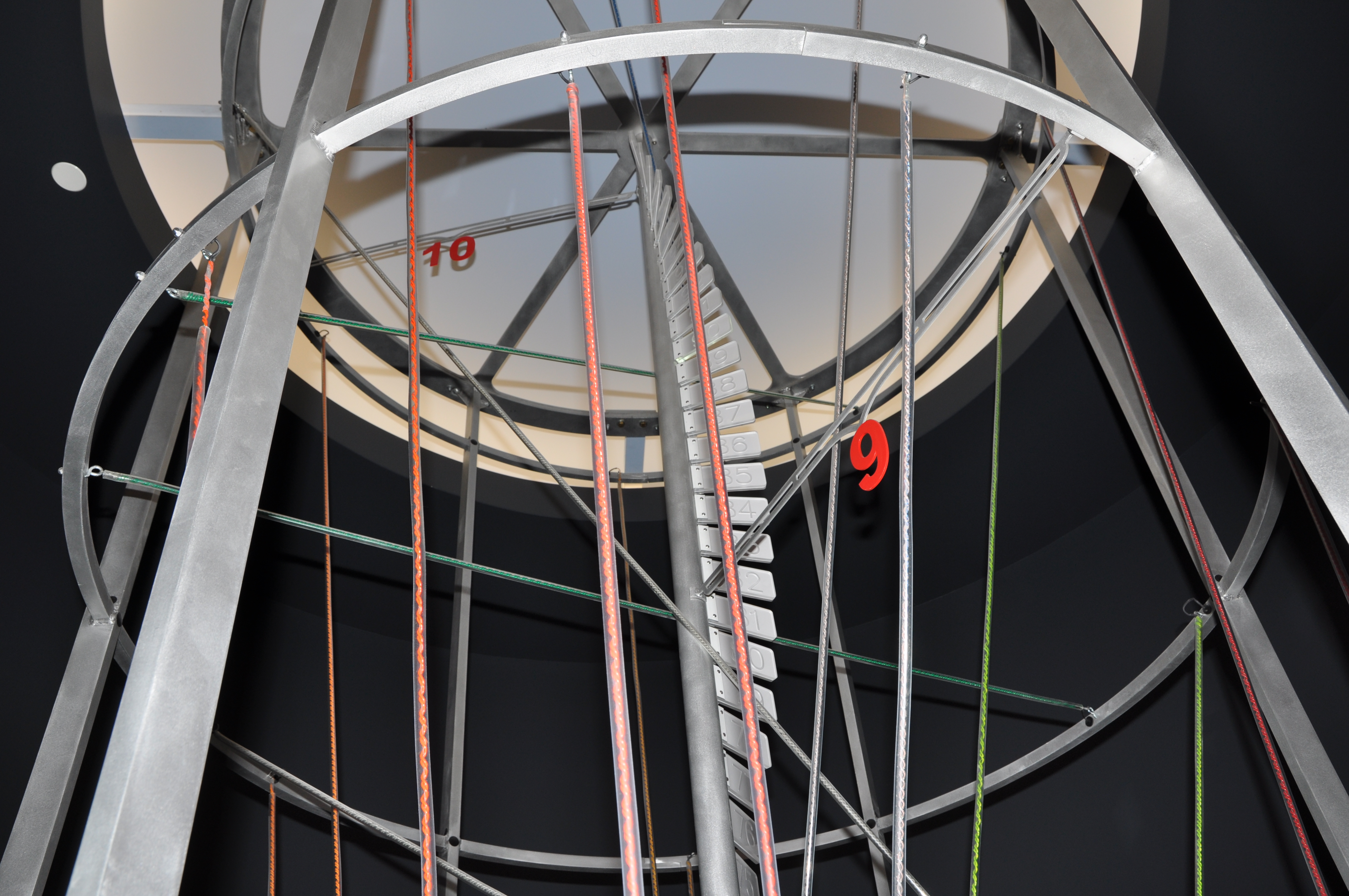 The lower floor of the museum sports a Math Square that reacts to your feet as you walk across it. If you stand on the square with several friends, the Math Square maps out line segments that represent the shortest path connecting everyone. In the picture below, the Math Square displays a maze by Robert Abbott. The premise is simple: Begin at “Start” and work your way to “Finish” by walking along the path. There’s just one catch: You can only make right turns—no left turns allowed! Can you navigate through the maze? 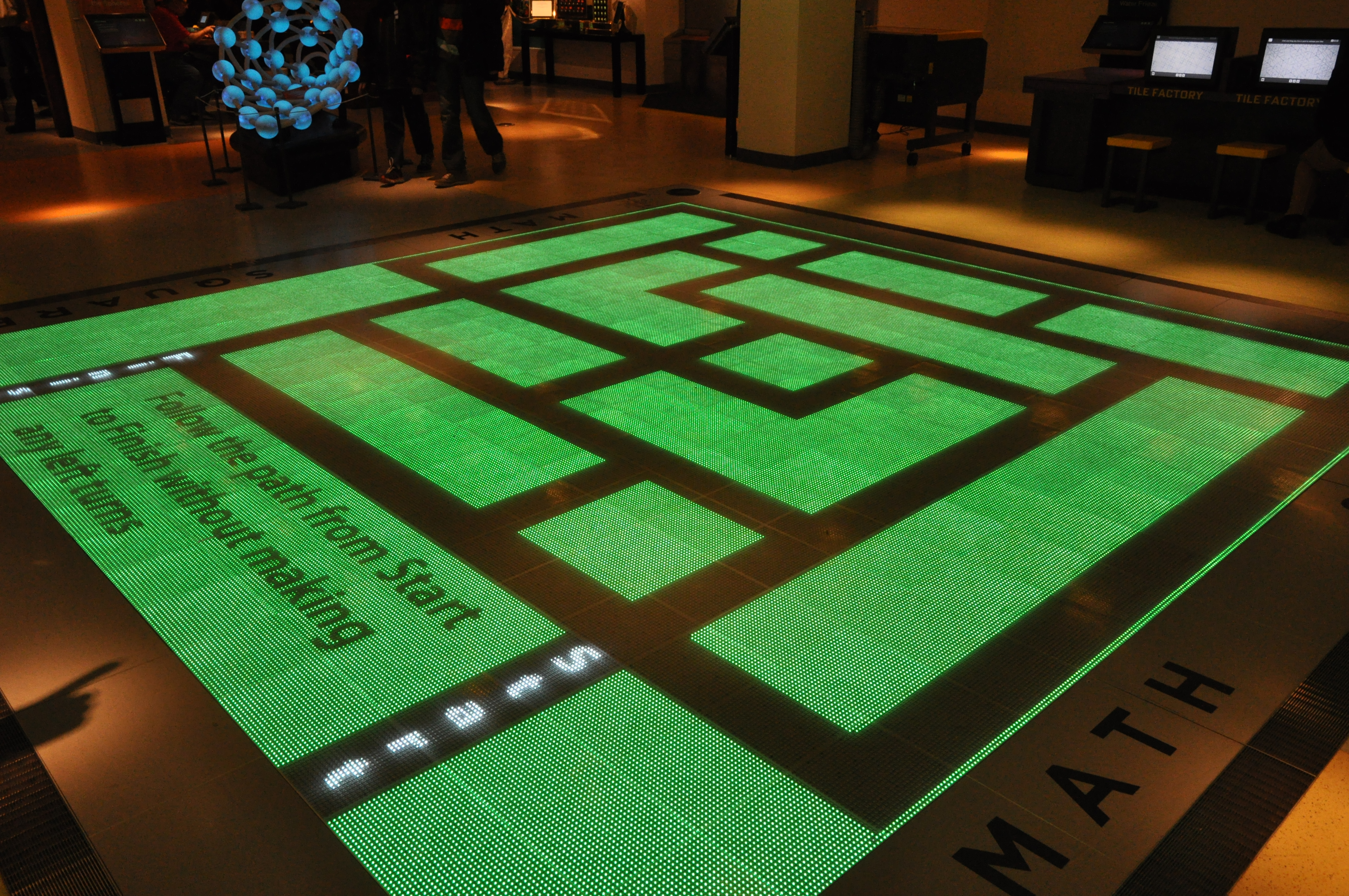 One of my favorite exhibits in the museum is the Human Tree. By standing in front of a screen and waving your arms, you can create copy upon copy of yourself, just like a fractal. 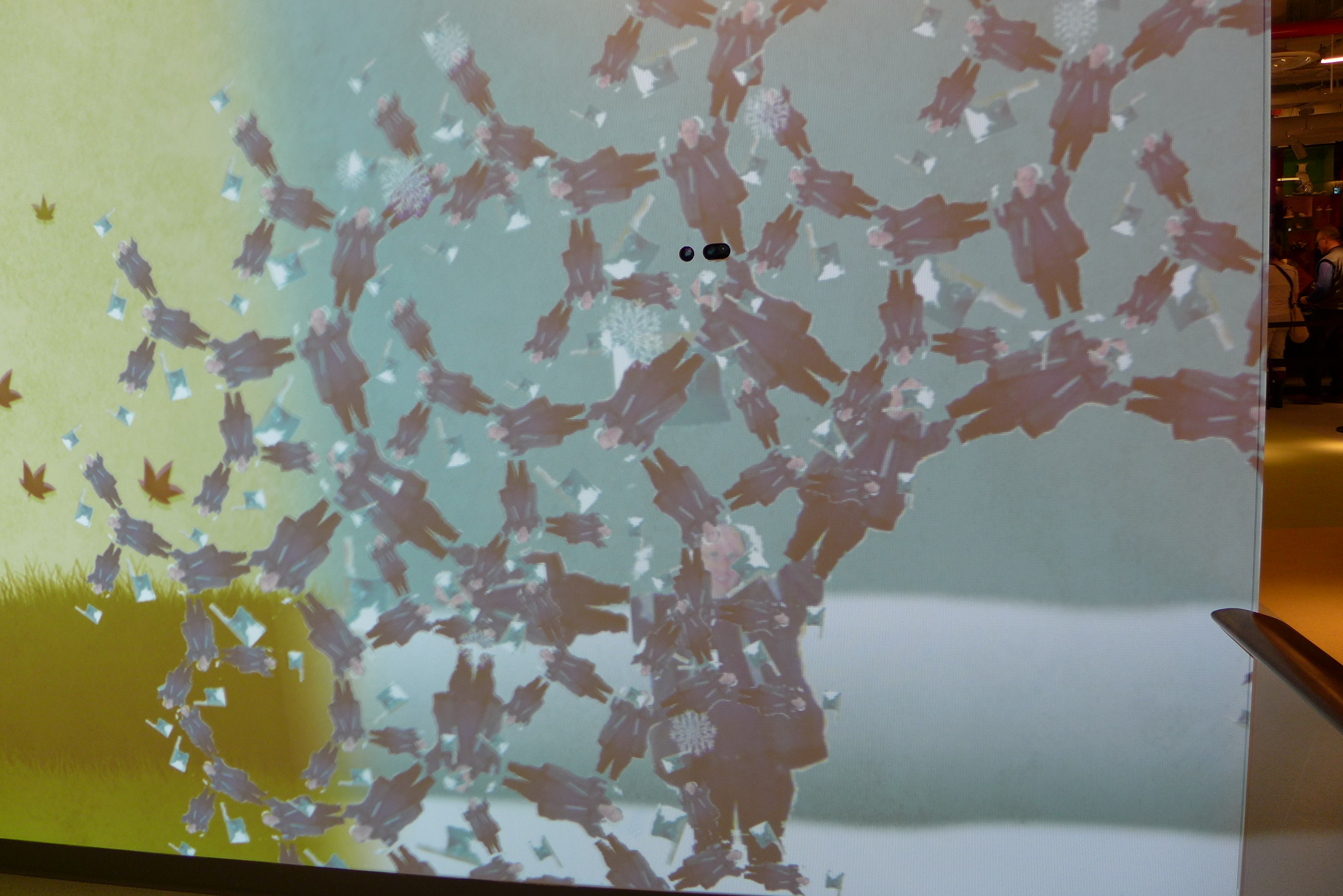 Pictures alone aren’t enough to convey the interactive nature of the exhibits, so be sure to view George Hart’s video that leads you on a short tour of the museum. George is responsible for many of the exhibits in the museum and designed a very cool geometric puzzle sculpture sold in the museum store.

The museum has been open for less than a month, but already there are healthy crowds of adults and children each time I’ve visited. And who knows? When people think of New York museums, perhaps their train of thought will be Mondrian, Monet, Miró, Math!