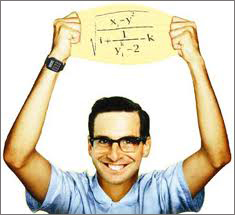 We’re all familiar with the stereotypical image of the math nerd: a weak and fearful loser, a geek, someone with a button-down shirt and glasses. While I don’t sport a button-down shirt, I do own the glasses (but not the nerdy kind . . . right?). Sad but true, this stereotype persists—even though Bill Gates and Mark Zuckerberg are examples of pretty darn successful math nerds.

While driving home the other day, I heard an NPR story that put a whole new spin on what it means to love and appreciate math. The story, U.S. ‘Connects the Dots’ To Catch Roadside Bombers by Tom Gjelten, discussed how math is being used by soldiers to help catch roadside bombers in Iraq and Afghanistan. These soldiers are called warrior mathematicians. What a cool name, I thought, followed by, Wow, that’s real math, and math is saving lives. This led to the logical conclusion, Why not ‘math warrior’ instead of ‘math nerd’?

As told in NPR’s story, Army Major Ian McCulloh, deputy director of the Counter-IED Operations Integration Center in Baghdad, is teaching soldiers how to use network analysis to identify the most influential (read: dangerous) people in the social network of IEDs (improvised explosive devices). Identifying the key ‘nodes,’ or people in the network, allows for intervention by U.S. military forces. Stopping the most influential participants in the IED network breaks up the network and prevents deaths.

I love this quote from McCulloh, demonstrating the power of mathematics:

“The first network I looked at probably had about 200 to 300 nodes in it,” he says. “It took an analyst with 26 years of experience about five days to look through it and identify where they felt the key vulnerabilities were. I was able to put it into the software that I use and do some basic network analysis and in about 15 to 20 minutes I had the same conclusion.”

Five days of work was reduced to 20 minutes, all because of math. That’s powerful.

As I listened to the story, I immediately thought of the Königsberg Bridge problem, which I would introduce in my geometry classes during the unit on nets. The Königsberg problem is a perfect example of taking a real situation such as the IEDs, reducing it to a network, and using network analysis to reach a solution. Unfortunately, due to standardized testing, nets have become a topic relegated to the ‘optional’ category in mathematics. They shouldn’t be. 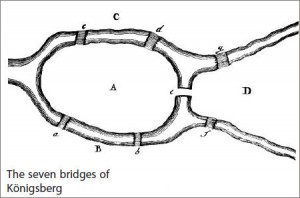 Looking at the Mathematical Modeling Standards, it’s very easy to see that the network analysis being done by the math warriors is a perfect example of the real-world modeling at the foundation of the Common Core State Standards. Specifically, the work performed by the math warriors shows that “diagrams of various kinds, spreadsheets and other technology, and algebra are powerful tools for understanding and solving problems drawn from different types of real-world situations.”
This ‘optional’ topic of nets, as applied to the IEDs, is a basis for helping us fight terrorism and save lives. Therefore, I have decided to no longer call myself a math nerd. No, no. I am a math warrior, fighting to prove that math is important and relevant.

I hope you read the article so that you and your students can see the application of nets in the real world. A real problem is provided in the article (as is the answer). Challenge your students to solve the problem—or, if nothing else, share with them the fact that math is out there, being used by real people for important things.

Perhaps the article will inspire you to become a math warrior yourself; and maybe your students will follow suit, aspiring to be powerful and courageous math warriors, ready to do battle and solve problems—math nerd glasses optional.