I heard a great radio interview on NPR this week with Tim Storms, who holds the Guinness Book of Records for the lowest note sung by a human. He sang a few low notes for the interview—so low that my non-bionic ears could barely distinguish a pitch. 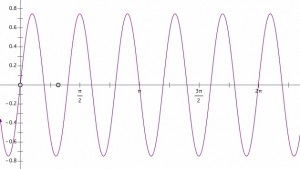 In 2008, Storms set a record with a low note of .7973 Hertz (Hz). He subsequently lost the record, but reclaimed it in 2012 with a low of .189 Hz, which according to Wikipedia is eight octaves below the lowest E on the piano. In the interview, Storms describes how the record-checkers determine which low note is actually the lowest. They used a frequency analyzer, which according to Storms, is usually used for testing frequencies of race car engines or “to measure elephants communicating with each other”.

That short little radio bit raised so many questions. I know about 440 A, but what are the frequencies of other notes on the piano and how can I calculate them? Can my ears tell the difference between the 2008 and 2012 low notes? And—what frequencies do elephants use to communicate? So with the help of Wikipedia and Sketchpad, I decided to explore these questions.

Wikipedia gives this handy reference chart for the frequencies of piano notes. (This chart shows the theoretical frequencies; in real-life, piano tuning is adjusted to compensate for string stiffness at the extremes. Wikipedia explains this better than I can.) Starting at A 440 Hz, which is key 49 on the piano, and scanning up and down the chart, I can see that the frequencies double/halve as I go up or down an octave, so the frequencies of the A notes in Hz are nice round numbers like 880, 440, 220, 110, and so forth, on down to the lowest note on the piano at 27.5 Hz.

Wikipedia also tells me that multiplying a frequency by the twelfth root of 2 gives a tone one half step higher. Given that there are twelve half steps in an octave, that seems logical. (I find it’s always good to do a bit of a logic check against any “fact” I find on Wikipedia.)

Now for some help from Sketchpad. First, I explored intervals. I started with that classic and memorable note, 440A. To hear that tone in Sketchpad, I used a Sound Action Button to “play” the function y = sin(440• 2πx). Then I had to do some mathematical thinking about how I would alter that musical function to go up or down a half step. You might want to think through this yourself before watching the video.

Next, I played with some very low tones. After this experimentation, I can see why Tim Storms had to have his notes checked by a machine in a sound-proof room. In my urban office setting, even with headphones on, the tones below about 10 Hz sound like a cat’s purr. Below 6 Hz, I’m no longer sure whether I’m hearing something or just imagining it. And the record-setting tones are completely inaudible. Crazy!

Now think about the math involved. Trigonometry, exponents, modeling. Anything you might want to try with your students? You can find the sketch at Sketch Exchange, along with some other contributions that investigate sound and music. I got too involved with the first few questions to get to the elephant communications. So let me know if you model that in Sketchpad!