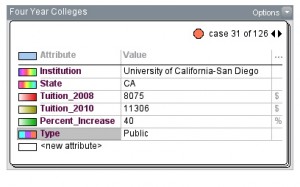 f with a grimace. Take this headline from Wednesday’s San Francisco Chronicle: “State’s college tuition rising fastest in nation.” Just what California parents need, more stress! The article goes on to explain that University of California and California State University campuses have the fastest rising tuition of public colleges, with tuition increasing about 40% between 2008–2009 and 2010–2011.

However, there is some excellent news lurking behind this headline. It turns out that the Education Department released this information to give some publicity to their College Affordability and Transparency Center website. The good news? Well, the website has TONS of data about public and private colleges that you can explore using the site’s interface, or better yet, by downloading the data and using TinkerPlots or Fathom to analyze the information.

Here’s a plot showing the tuition for each school in 2008, separated by type of school. 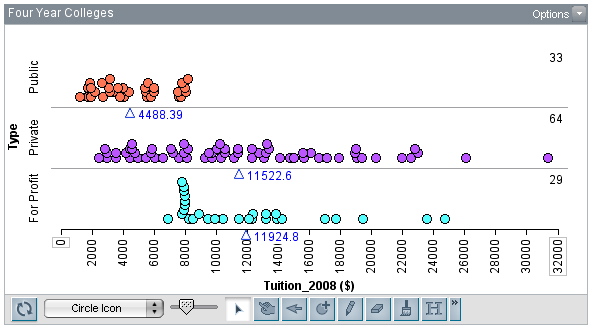 Now, here’s a graph of the tuitions for the same institutions for the academic year 2010–2011. As you can see, costs rose quite a bit from 2008 to 2010. That’s particularly brutal when you consider the state of the economy at the time. Just looking at the public institutions, the average tuition rose to about $6500/year. 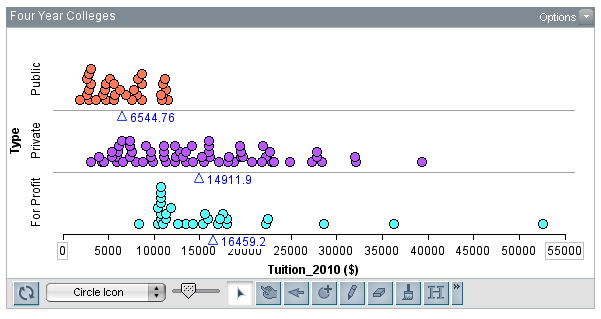 That turquoise dot at the far right? That’s the New England Culinary Institute, which charged a whopping $52,600 for a year’s tuition in 2010–2011.

To quantify the change in tuition from  2008 to 2010, here’s a graph of the percent increase, still grouped by the type of institution. 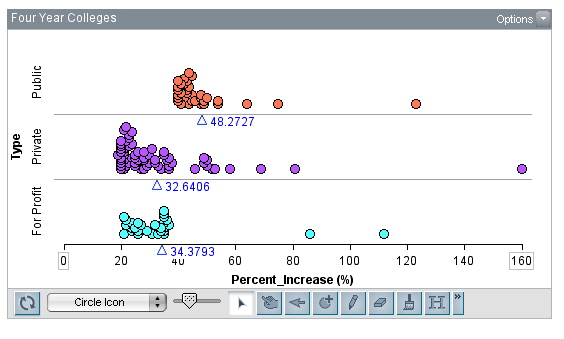 Disturbingly, those relatively affordable public institutions seem to be heading towards unaffordability faster than I can graph them. (Oh, and that private college with tuition that went up 160% in two years? That’s the University of Fort Lauderdale.) 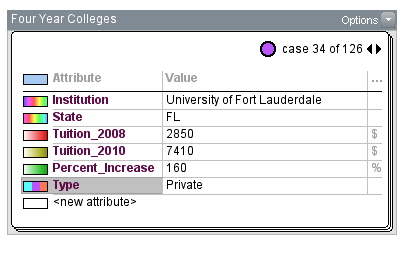 But I hear some clearing of throats and scratching of heads out there. There’s something up with these data. Are these 126 colleges really a random sample from the whole population of four-year colleges in the United States?

Well, no, they aren’t. This group is drawn from the institutions with the fastest rising tuition costs. So, although college tuitions are increasing, these “average” increases of 33%, 34%, and 48% are not typical nationwide. The national average percent change for this time period is actually 15%, according to the website. Not great, but not as bad as I’ve depicted above. (Sorry!)

The College Affordability and Transparency website is a great resource for parents, teachers, and counselors to help students analyze their options. The site shows not only the tuition and fees for institutes of higher learning, but also the average net costs, which are often considerably lower thanks to grants and scholarships. You can also search for colleges that offer specific programs, such as nursing, culinary arts, or teacher education. And for many of the different search options, you can download the data as an Excel doc and then copy the data into TinkerPlots or Fathom and generate your own graphs. This is a great way for teachers to incorporate very relevant real-world data into a lesson on data analysis.

Oh, and speaking of headline news from San Francisco, Matt Cain pitched a PERFECT game on Wednesday for the Giants! That’s only happened 22 times in major-league baseball. What are the odds? That’s another blog post…