Scan the headlines and you’ll see a stream of stories about educational technology: 1 to 1 iPads, teacher blogs, the flipped classroom… the electronic beat goes on. I’m not pining for the silky feel of chalk on my fingertips, but there’s something to be said for old school games and their ability to illustrate mathematical concepts. I’ll wager a hotel on Boardwalk that Monopoly—perhaps the most iconic of all board games—covers more content than most educational apps, with the added bonus that it brings parents and children together, face-to-face, to practice math. 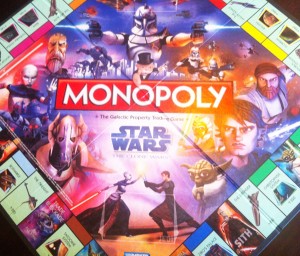 Let’s take a look at the board. First of all, it’s a square bounded by 32 rectangles and four squares, how lovely is that? There is a pattern to the shapes that make up the path of play, with the squares at the corners and the rectangles along the sides. As children learn to navigate the board, they start to recognize that moving from corner to corner or railroad to railroad equals ten spaces.

With the exception of the railroads and utilities, the properties of Monopoly are laid out on the board in order of ascending value, much like a number line. Say it with me everyone: “Location, location, location!” Of course, if you purchase one of the themed Monopoly boards (we own the Star Wars Clone Wars and San Francisco Giants versions) there are advanced mathematical lessons to be learned, such as “Do you think Tim Worrell was overvalued given his position on the board and position within the Giants as a set-up pitcher for Rob Nen in 2002?” This past weekend, my son realized a pattern in housing prices: houses on the first row cost $50, houses in the second row cost $100, houses on the third row cost $150, and houses on the fourth row cost (you guessed it!) $200. 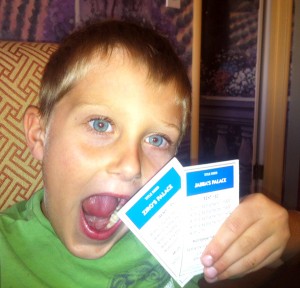 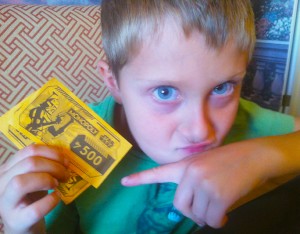 Let’s talk money. Players are allotted a certain amount of money with which to pay expenses and invest in properties. Hmmm… learning to budget and invest money wisely – practical applications anyone? Players learn about mortgage values, return on investments, and how to calculate property tax as a percentage of assets owned. When auctions come up or houses are scarce, players can learn about supply and demand. This bleeds into economics, but the lessons have important applications for mathematics.

Money can be quite a motivator. My son is always keen to purchase Boardwalk and Park Place. He insists on saving his two 500 dollar bills until he has landed on, and purchased, both of these elite properties. Early on, I noticed he would pass up strategic purchases to save these two bills regardless of how much money he actually had. He hadn’t made the connection that he could have 500 dollars without having a $500 bill. His understanding of fractions and multiplication has skyrocketed since this epiphany. Using this strategy, my son has been playing the odds. He invests his resources almost exclusively in putting houses (and then hotels) on those two properties, knowing that ultimately I will land on one of them. It’s hard to argue with this strategy when you encounter a $1,400 stay on Boardwalk.

So let’s review the topics present in Monopoly: addition, subtraction, multiplication, fractions, percentages, statistics, probability, interest, patterns, number lines, and basic geometry. I’m sure I’ve left out a few, so please post your ideas in the comments or suggest other classic games that teach math. My favorite cross-curricular classic is Mille Bornes, a French card game. If you haven’t tried it, give it a go. Or should I say, Roulez!