Today I’d like to share my personal story about Key Curriculum Press, a company I’ve experienced as a classroom teacher, as an editor, and now as a parent.

For many weeks now, I’ve been trying to write a post about some of the dismal trends I see in education right now, but I keep getting bogged down in the depressing details that I read about in policy analysis papers and first-hand accounts from my friends in the classroom. And yet, in my personal situation, I have nothing but good news to report. So I’m putting that ugly reality on the back burner (look for it in my next post). Instead, I’d like to present some good news from the world of math education. 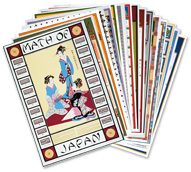 During the 13 years I taught in public schools, I became very familiar with many different products from Key Curriculum Press, even though I knew nothing about the company. I had used Key to… workbooks, had Math of the World posters up in my room, piloted units from the Interactive Mathematics Program, and used Sketchpad all the time, including its supporting activity books.

It was clear to me from my first interactions with Sketchpad that this was hands down the most powerful math education tool ever created. (Keep in mind that, as of yet, I had no personal ties to Key, so my opinion to this point was totally objective.) Not only did I use it as often as I could reserve the computer lab, but later I began teaching a math elective course that had been created at our sister high school that made use of Sketchpad every day. This course focused on the intersection between geometry, art, and nature, and was the most fascinating and powerful course I ever taught.

But the organization that primarily defined my teaching career was College Preparatory Mathematics, or CPM, which was a project launched out of UC Davis that developed a problem-centered curriculum for high school (and later, middle school) mathematics.

After a couple of life transitions, I found myself working as an editor for Key, where I’ve had the great fortune of developing curriculum with an editorial department completely comprised of former classroom teachers. In addition to work around Sketchpad, I was the lead editor on the latest edition of Discovering Geometry, the landmark textbook by Michael Serra that has transformed the way geometry is taught.

Meanwhile, my daughter Xochi began middle school in San Francisco, and I was happy to find that they were using CPM in her 6th grade math class. Xochi had always had a positive attitude toward math throughout elementary school, and this continued as she used the CPM materials in 6th grade.

However, during that year the district went though a textbook adoption in which they chose traditional texts for the high school sequence, although they also adopted Discovering Geometry as one of two choices for geometry. As Xochi moved into 7th grade, she began a two-year period of using traditional math texts, during which time her attitude toward math deteriorated noticeably. She was still able to do well, but the subject no longer inspired her as it once had.

This past fall, Xochi began 9th grade at Washington High School, which happens to be where Michael Serra taught and where they continue to use Discovering Geometry. Not only has Xochi’s attitude toward math improved again, but her dad’s name is the first listed on the credits page. And while I can’t help but feel a little swelling of pride at that, she finds it extremely embarrassing (as with just about anything that has to do with me).

The most vivid memory for me was the first night that she did homework out of Discovering Geometry. I remember her grumbling about not having enough space to do a problem on one line of her paper, and when prompted to use geometry tools she muttered “I’m not going to use a stupid ruler.”

Ten minutes later she was using her ruler and protractor to draw figures to specification, none of which fit onto a single line. I could see her internalizing all kinds of mathematics, especially the connection between the symbols and measurements used to describe shapes and the actual shapes themselves.

Then she came to a problem where she had to draw a segment from (-3, 0) to (0, -3). I watched without saying a word as she started with the first point, erroneously plotted it at (0, -3), and then when she went to plot the second point, realizing that she had mistakenly plotted the first point and fixing it. I heard her articulate this all out loud as she was working on the problem and it was great to see how one simple problem could be designed to help students correct their own thinking.

But my favorite experience was when Xochi asked for help one day with “I don’t understand what they want in this problem.”

While not every math student has a textbook editor for a father, I’m confident that we at Key have crafted our lessons, investigations, exercises, and technologies to help all students build a deeper understanding of mathematics for themselves, one that they’ll be able to refer back to long after they’ve left the classroom. For that, I’m proud of both my daughter and the work we’re doing at Key to help students like her succeed.