Sketchpad has always been great for learning by doing. You can create a triangle and then manipulate the angles with your mouse and observe the results. There is something really primal, though, about using an iPad or a Smart Board, reaching in and grabbing the geometry with your bare hands. The multitouch on the iPad and in newer Smart Boards especially gives you the feeling of an entire real world that’s yours to explore. 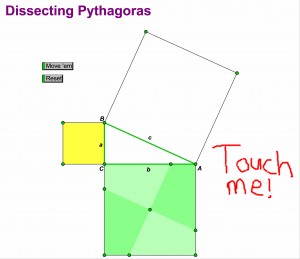 “Please Do Not Touch the Exhibits”

I remember being bored in math class. We didn’t have Sketchpad or any tools other than textbooks and a dry erase board. The teacher would explain a formula at the beginning of class and we’d spend the whole period studying proofs. I learned the formulae, but didn’t really understand why they worked or how someone would come up with them.

Memorizing the Pythagorean Theorem was easy. Why, even someone who was just given a brain could recite it (or not).  It wasn’t until using Sketchpad that I began to actually understand it. Reaching in with Sketchpad Explorer (on the iPad), moving multiple points around, and watching as the boxes grew and shrank allowed me to discover what was really meant by “the sum of the squares”.

I was so excited that I brought an iPad home and showed the sketch to my wife. She had gone to the same school, had the same teachers (we even had a same math class), and she had the same reaction. “OH! So that’s what they meant!”

For tactile learners like us, tools like Sketchpad Explorer and Smart Boards help transform math from being an abstract set of numbers into something we can touch and understand. I’m glad that tools like these are getting into more and more classrooms and they make me excited for the future of learning. The more learning styles we can encompass, the more students we will reach.

“On the sketch was a paper label, with the words TOUCH ME”

We recently released version 5.04 of The Geometer’s Sketchpad and I’m happy to say it has a couple of new features for physical learners, including enhanced Smart Board integration.

Draw some ink with the Marker tool and if you don’t like it, pick up the Smart Board eraser and erase it (as long as the inking session hasn’t ended yet). If you have one of the new model Smart Boards that supports multi-touch, you can drag multiple objects or points at the same time using the Translate tool.

The new parameter-dragging, or “flickrementing,” that was seen in Sketchpad Explorer is now available in desktop Sketchpad. When you have a boxed parameter, you can click in the box and then drag up or down to increase or decrease the parameter (by the Keyboard Adjustment value).

While this is obviously of benefit when using Sketchpad on a interactive whiteboard, where a keyboard may not be handy, it can also give you the feeling of reaching into the parameter and pulling it to the number you want it to be. Another neat use is to have the parameter be used in a function. Then, as you drag and adjust the parameter, the function will change, almost like an animation that responds to your movements.

It can be fun to just play with math sometimes. Do you have any tips or stories about getting your hands dirty with math? Be sure to leave them in the comments!