For the past eight months, my colleague Scott Steketee and I have collaborated with the authors of the elementary curriculum Everyday Mathematics to design interactive Web Sketchpad models for their next edition.

When it came time to create a Sketchpad representation of an isosceles triangle, I built the interactive triangle model below. Try dragging any of the triangle’s three vertices. You’ll see that while the angle measurements of ΔABC change, angles A and B always remain equal.

This isosceles triangle model is a a classic—a wonderful example of Dynamic Geometry’s ability to provide instantaneous feedback about a geometric construction as its parts are being dragged. As such, I expected the Everyday Mathematics authors to green-light the isosceles triangle without any discussion.

The authors maintained that the model was too passive for young learners. Specifically, Sketchpad attended to the angle measurements, leaving the students to take on faith that the displayed measurements were correct. If students could measure the angles themselves, they not only would receive much-needed measurement practice, but they also might feel more invested in the discovery that angles A and B were always equal.

Based on this feedback, my initial instinct was to remove the angle measurements and include a virtual protractor that could be moved from vertex to vertex to measure the three angles. But this approach felt too cumbersome. I wanted students to measure the angles of as many isosceles triangles as possible, and if they only had one protractor, this process could become wearying.

My solution was to create the rather funny-looking model below with three mini protractors attached to ΔABC, one per vertex. 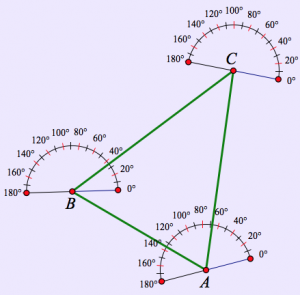 With this model, students can drag vertices A, B, and C to create a new triangle and then swing each of the three protractors into position to estimate the three angle measurements. The picture below shows the result of positioning all three protractors. 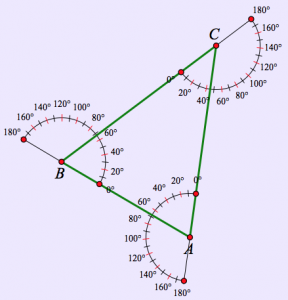 You can try this out for yourself and with your students by going to the second page of the interactive Web Sketchpad model.

The isosceles triangle is just one example of a sketch where my long-held opinions about Dynamic Geometry pedagogy were challenged by the Everyday Mathematics author team. I’m enjoying the opportunity to revisit and refine my beliefs!