Nathan Dummitt teaches mathematics and statistics at Columbia Preparatory School in New York, NY. He teaches all four years and is interested in sharing low-threshold, high-ceiling activities with his students.

I teach Geometry at a high school in New York City, and I like to start the school year by giving an open-ended problem on the first day of class. I pick problems that both promote student discussion and spur the creation of a student work product that can decorate our classroom walls and be referenced later in the year.

I spend most summers in Japan and am always on the lookout for interesting problems in Japanese textbooks and math contests.  In recent years, a consistent source of excellent problems has been the Japanese Arithmetic Olympics, which is held annually for fifth and sixth-grade students. My activity for the first day of school this year is based on a problem that appeared on the 2007 Olympics:

How many different ways can you dissect a 5 × 5 square into four pieces that can be rearranged to make a 3 × 3 square and a 4 × 4 square?

I’ve made a sketch that allows students to experiment with different colorings and arrangements before they put marker to paper. An interactive Web Sketchpad version appears below. The first page of the sketch displays one solution to the problem while the second page provides students with a work environment  to develop their own solutions.

I give my students the grids towards the end of the first day of class, and they then work in small groups for about 10 minutes to investigate various dissections.  Whatever they don’t finish is assigned as homework for the first night.  When they bring in their grids the following day, we compare them and then decorate the walls of our classroom with their work. Below, you can see photos of what that they produced.

Contrary to what I’ve seen in many textbooks, I think it is vitally important for students to be exposed to area at the beginning of the Geometry curriculum. The Olympics problem not only offers a good chance for students to discuss area, but also gain a preliminary and informal introduction to the Pythagorean Theorem, which is lurking in there as well. We can then revisit their colored grids later in the year when we study the Pythagorean Theorem more formally.

If any of you try this activity with your students, I would love to hear how many different dissections they find.  Our present total is 13, but there may be more out there! 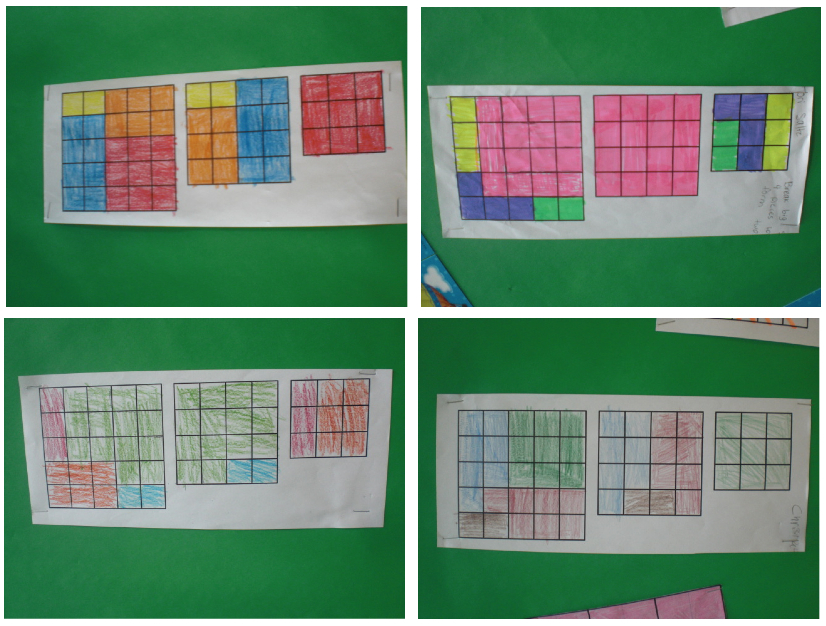