The cover story of the April 2014 issue of Mathematics Teacher is on “Iteration in the Complex Plane”, by Robin S. O’Dell. It sounds like pretty advanced mathematics, but is surprisingly accessible with The Geometer’s Sketchpad.

Begin your experimentation by changing the values as described in the sketch itself:

Even more striking results ensue when you add color, using the depth of each segment to determine its color. Press the Next button to go to the second page of the sketch, and try the experiment described there.

The colors parameter determines how many colors of the spectrum are used before returning to the original color, so setting colors to 3 results in a design that alternates among three colors. When colors is not a whole number (for instance, 4.05), the fifth segment will have a very slightly different color from the first. By choosing colors that interact with the geometric nature of the complex design, you can produce some very lovely effects, effects that rival the color work shown in Figure 8 in the article. 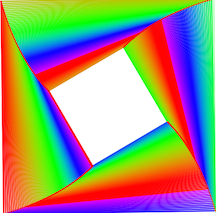 The beauty of the iterated designs described in this article can motivate students to experiment, to persevere, to strive to understand the structure created by these iterations, and to create stunning mathematical art.