Last year, I had the pleasure of co-organizing a geometry-focused coaching collaborative led by Metamorphosis, a New York-based organization that offers professional content coaching to transform the mindset and practices of teachers and administrators. I had so much fun that I decided to do it again! My workshop partners were Metamorphosis staffers Toni Cameron, Ariel Dlugasch, and Kara Levin.

Several days before the workshop, Metamorphosis sent a handout of the picture below to the participating math coaches and asked them to think about the following: 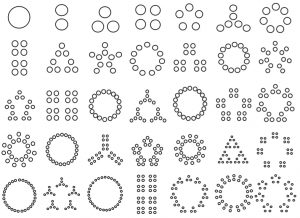 The workshop began with the coaches sharing their insights. Here are just a few of their observations:

We asked the coaches to draw, share, and justify a visual representation for the number 36 since the handout only displayed the numbers 1 through 35. The coaches’ drawings were varied, and they did a nice job of justifying their arrangement of the circles.

After 45 minutes of discussion, we turned from the static representations of the numbers to two interactive Web Sketchpad versions of the factorization diagrams that I built prior the workshop. My goal was to allow students to build and animate images of their own rather than rely solely on the handout. (These dynamic models appear at the end of this post, along with a short video that explains how they work. I suggest watching the video and experimenting with the models before reading further.)

It was fun to speculate how students might use the dynamic models, but of course the only way to really know was to bring the models into a classroom. Luckily, our coaching collaborative was held at the Battery Park City School in lower Manhattan, so we were able to work with one of its fifth-grade teachers, Francis Laros.

As all of us watched and took notes, Ariel, our Metamorphosis coach, conferred with Francis about how he might use the dynamic models in his classroom (Metamorphosis develops coaching skills by allowing their coaches to watch other coaches in action.) Francis and Ariel decided that they would start with the second of my two dynamic models and give students time to play with it before setting a specific mathematical task.

After a brief introduction to the model and some time for open exploration,  Francis challenged his students to find multiple ways to create 24 circles. When they were done, students turned to a neighbor and described in words alone how they built their construction. This was a great opportunity for students to use mathematical vocabulary and to practice giving precise directions.

When we asked Paul why he did not simply attach four circles to each of the six vertices of the larger hexagon, he said that he wanted to challenge himself. Paul’s comment provided a satisfying ending to our day.

How might you use these two interactive models with your students? 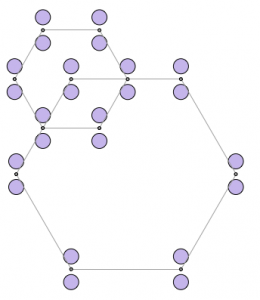