Ken Gordon has written our first in a series of guest blog posts from people working with Key Curriculum products in schools. Ken teaches Precalculus and Calculus in an accelerated program at Sisler High School in Winnipeg, Manitoba, Canada. He has been using The Geometer’s Sketchpad since first seeing it at an NCTM conference in 2004. Ken is also a consultant for Key Curriculum and moderates online courses with The Geometer’s Sketchpad. 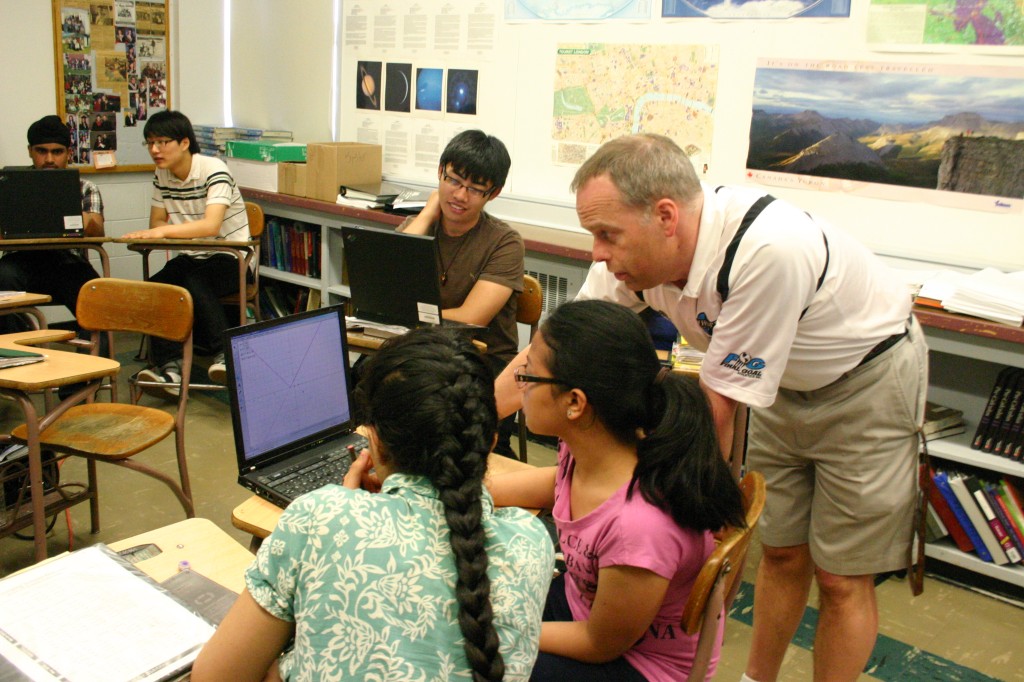 One of the major hurdles for most teachers when they are trying to incorporate more technology into their courses can be the availability of computers or computer labs. This is something that we have struggled with at Sisler High School for many years. In 2008, new mathematics curriculums were introduced at all Western Canadian schools, beginning with K–8. Grade nine was added in 2009, ten in 2010, eleven this past year, and the new twelve will begin this fall. At Sisler, we have viewed this as an opportunity to try and incorporate more technology into the courses as we are implementing these new curriculums. Last year, we were quite successful in adding many labs and demonstrations involving The Geometer’s Sketchpad (GSP) to the new grade ten “Introduction to Applied and Pre-Calculus Math” course.

This year, however, has been another story, as increased enrollment at our school and increased need for computer labs by other programs has dramatically reduced our access to computers. While we have done a number of GSP demonstrations in the classroom, there has been little to no opportunity to get students into the lab to try some hands-on activities.

One of my colleagues, who was also becoming frustrated by this lack of lab access, took it upon himself to contact a local program called “Computers for Schools.” They take used computers from businesses, refurbish them, and turn them over to schools for use in the classroom. He inquired about getting a set of twenty laptops that we could use in our math department as a portable lab. The computers arrived a few months ago, and were recently upgraded to include all of the relevant programs we need for our department, including The Geometer’s Sketchpad. I finally had the opportunity to use this portable lab with my grade eleven Precalculus class this past week.

Having just finished a unit on absolute-value functions and equations as well as reciprocal functions, the plan was to review all of these topics by creating equations with parameters in them so that we could explore the behavior of these functions in the dynamic environment of GSP.

With my students working in pairs, I had each group pick up a laptop. The fact that these laptops are not connected to the school network was a bonus, as they booted up quickly and the students were able to get Sketchpad up and running in much less time than it would have taken us to walk to the lab and all log in. I used a SMART Board connected to my computer to walk the students through the process of creating a linear equation of the form y = mx + b that could be manipulated dynamically. We plotted the function and played with the parameters so that we could see how they affected the appearance of the function. We then looked at y = |mx + b| and compared the two functions side by side. The discussion in the pairs was amazing! Students wanted to make one graph show and the other hidden, so we looked at creating Hide/Show buttons. We also played with the appearance of our functions by changing line styles and colors. 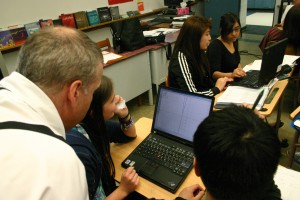 We then moved on to parabolas of the form y = a(x − p)2 + q, followed by y = |a(x − p)2 + q|. By this point, I needed to give very few instructions, as the students simply replicated many of the steps we followed in the first example. There were many “ah-ha” moments around the classroom, as the students were buzzing about the relationships between the two curves. All of the static sketches that I had been drawing on the board the past few days were now coming alive, and the class was developing a deeper understanding of how they related to each other.

When we moved on to reciprocal functions by graphing functions of the form y = 1/(ax + b) and y = 1/(a(x − p)2 + q), there were many students who suddenly had a greater appreciation for why asymptotes exist. We talked about how the values of p and q can greatly affect the appearance of the reciprocal of a quadratic function—something that was lost on them a few days ago, but was now easy to understand.

Then something very interesting happened: Students began combining the reciprocal and absolute value functions! They were getting some very interesting curves, and we began discussing why they looked the way they did. The composition of these functions is not something that is in this course, but made for a natural extension of the topic, and was something we would not have considered without GSP.

By the end of the class, the students were sad to be putting the laptops away, and were all anxious to know when we would be doing a lab like this again. It was wonderful to see such a positive experience in the classroom, and fantastic that we were able to bring the technology to the students. The class had a chapter test the next day, and the class average was a full 10% higher than the class average of my class that took a similar test last semester. Their understanding of the graphs of reciprocal and absolute-value functions was what carried them so much higher than the previous class, who did not have the benefit of the portable lab.

Next week, the students will get their wish, as we will explore systems of linear and quadratic inequalities with GSP. Having a portable computer lab was everything I had hoped it would be, and more.