In the interactive Web Sketchpad model below (and here on its own page), ABCD is an arbitrary quadrilateral whose midpoints form quadrilateral EFGH. Drag any vertex of ABCD. What do you notice about EFGH?

The midpoint quadrilateral theorem, attributed to the French mathematician Pierre Varignon, is relatively new in the canon of geometry theorems, dating to 1731. Mathematics educator Chris Pritchard says the theorem “epitomises simplicity, economy, and elegance….And even today, in an idle moment, I find myself doodling…perhaps still seeking a quadrilateral for which Varignon’s theorem doesn’t hold.”

Varignon theorem is also a poster child for the benefits of dynamic geometry software, appearing regularly in articles that introduce readers to the pedagogical opportunities afforded by the software. Below are four commonly cited ways in which  Varignon’s theorem illuminates the power of dynamic geometry:

I think items 1–3 above showcase dynamic geometry at its best, but I’m less enthusiastic about dynamic geometry software’s role in the proof of Varignon’s theorem in item 4. Telling students to construct the diagonals of the parallelogram feels like we’re depriving them of the aha! moment of realizing that the proof is nothing more than several applications of the triangle midsegment theorem. Below are  two ways that we might make better use of dynamic geometry to motivate a proof of Varignon’s theorem. Each focuses on a degenerate case of the construction, turning quadrilateral ABCD into a triangle.

While exploring this task, students discover that the overlapping occurs when two opposite vertices of ABCD coincide (points B and D in the picture below). In fact, not only do the sides of the presumed parallelogram overlap, but its remaining two sides disappear entirely. The image below is certainly suggestive of the triangle midsegment theorem—it’s only missing segment AC. To gather more visual data, students can drag point C to view a collection of triangles ADC (with missing side AC), all displaying their midsegment. 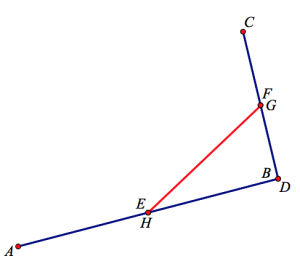 And as a bonus, the picture below suggests another theorem: Start with a triangle ACD and construct midpoints G and H on two of its sides. On the third side, AC, construct midpoint B and then construct midpoints E and F of AB and CB, respectively. Connect points E, F, G, and H. They form a parallelogram. You can view this model on the second page of the websketch at the top of the page by clicking the arrow in its lower-right corner. 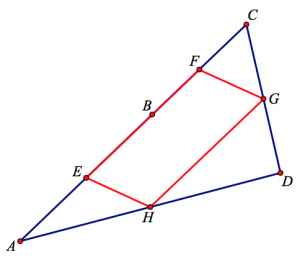 Finally, the Web Sketchpad model below (and here on its own page) shows a fascinating variation of Varignon’s theorem described by Celia Hoyles in The Changing Shape of Geometry. We start with a random quadrilateral ABCD and a point E. Construct a segment EF passing through vertex B so that EB = BF.  Then construct FG, passing through vertex C, so that FC = CG. Continue this construction method with GH and HI. Now, drag point E. Notice that vector IE maintains its length and direction. Can you prove why?

Hoyles writes, “…when I noticed the invariant vector and could explain it, my perspective on the original theorem completely changed. I now see Varignon as a particular case of a more general theorem, which can be stated informally as follows: every quadrilateral has associated with it a fixed vector IE, which just happens to be zero when the original quadrilateral is a parallelogram.”

One thought on “Digging Deep Into Varignon’s Theorem”