Several years ago, I wrote a blog post about the value that students derive from writing mathematics with Sketchpad. The post included an example of a simple Logo iteration, easily implemented in Sketchpad, that produces some very complex and interesting shapes depending on the values of several input parameters. In the article* where I found this iteration, authors Al Cuoco, Paul Goldenberg, and June Mark challenged the reader to figure out how to predict the pattern from the input parameters. 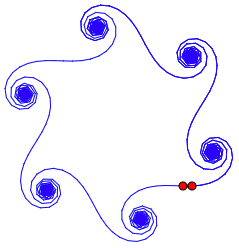 My original post stressed the value of having students write mathematics by using The Geometer’s Sketchpad to construct their own interesting mathematical objects and in the process exploring what sort of mathematical story they might create as they elaborate on and speculate about their construction. I described this process as being similar to the creative work students are expected to do in their English class: writing a short story in which they set the stage, introduce the characters, develop the plot, and so forth.

Though the full version of Sketchpad remains the best tool for students to use in creating such a mathematical story from scratch, Web Sketchpad has progressed to the point that I can give you the beginning premise of the story (in this case a short mystery) and then put it in your hands to develop the plot, to find the clues, to identify potential suspects, and in the end to solve the mystery.

Even better, you can put this same beginning in students’ hands and let them develop their own plot, find their own clues, and pursue their own suspects. Though their solution to this particular mystery is likely to be similar to yours, the body of the story—the clues found, the suspects pursued—will be their own.

So here it is: use the Mystery tool in the blank sketch area below to set the scene. After you tap or drag the tool, you can either position each of the five glowing objects individually, or press the green check mark to accept them all in their current locations.

Your scene should now include five characters:

Begin your plot development by increasing the depth: try 5 first to see how the pattern begins. Make a guess as to what will happen when you make depth 100, and then try it. Drag the red points to see their effect on the pattern. Make another guess as to how the pattern will look at depth 1000 before you try it.

Solve the Mystery: Explain how the pattern depends on the values of angle and increment, and test your explanation by using it to predict the result of each of the values shown above.

*Note: The Logo program referenced above is adapted from Al Cuoco, Paul Goldenberg, and June Mark: “Habits of Mind: An Organizing Principle for Mathematics Curriculum” (Journal of Mathematical Behavior 15(4):375-402, December, 1996).